A job advert has been written entirely in computer code, in order to attract and find the best candidates 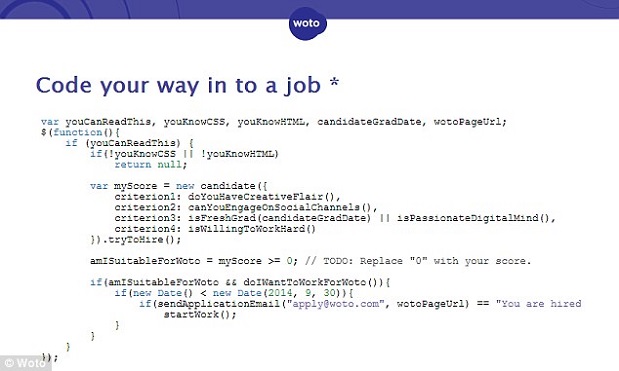 A job advert has been written entirely in computer code, in order to attract and find the best candidates.

A recruiter has released a job advert written entirely in computer code in order to attract and find tech savvy applicants.

Created by London-based Woto, the advert was created in order to recruit a creative designer to join the company, but must also be adept at coding in order to apply.

As coding and writing was an essential part of the role, Woto saw no easier recruitment strategy than to post the actual job advertisement in code.

Ekin Caglar, co-cofounder, added:  ‘As a company embracing the future, we want to employ young people who can “talk our talk” but also learn and develop at the same rate as the technology around us.’

Whoever cracked the coded criteria first and applied for the job in code would be rewarded with a paid internship with Woto located at the prestigious Bartle Bogle Hegarty advertising agency.

The website currently has a user base of 10,000, with the site set to ramp up its activity in the coming months.

The founders of the firm believe that as technology is changing the nature of jobs available in the UK, the next generation of IT graduates will need to be increasingly more flexible.