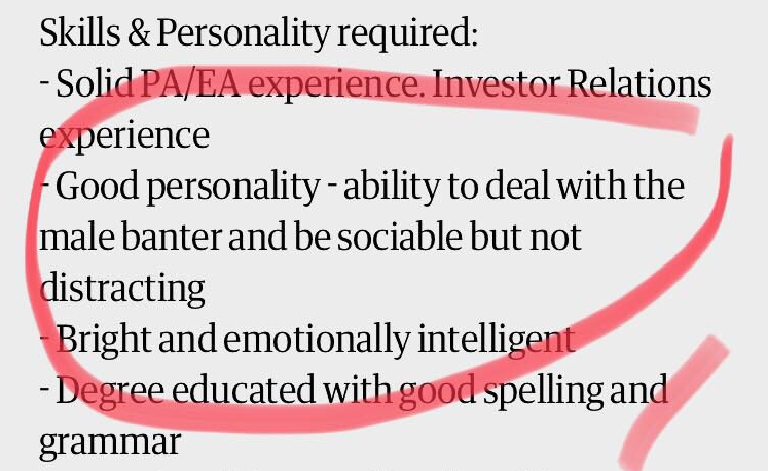 The advert asked for candidates who where sociable and not distracting (Twitter.com)

A job advert has been accused of being sexist after it required candidates to be able to deal with male banter.

The advert, which was posted by a property investment firm in Mayfair for a new “Executive Assistant & Investor Relations Associate” has faced a backlash after listing the following under its “Skills & Personality required” for the administrative role:

“Good personality – ability to deal with the male banter and be sociable but not distracting”.

The advert, posted by RMS Recruitment with a salary of £40-45,000 p/a, caused outrage on social media, where users have called it “totally unacceptable”, “discriminatory” and “regressive” – while stating that City firms demanding women quietly ‘deal’ with male ‘banter’ has long been shorthand for putting up with persistent workplace sexual harassment.

Theatre director Hannah Joss, who brought it to the attention of the internet, after which the listing was removed from Guardian Jobs and Independent Jobs.

In the description, the Mayfair client describes itself as a “Tight knit, hard working and family orientated” workplace, adding that “various friends and family members work in the office so … it is a relaxed and buzzy environment.”

RMS Recruitment, who placed the advert on various job sites, is a “small boutique, select consultancy” specialising in assistant and secretarial roles in the Mayfair area. It is not clear whether RMS then writes the copy for the advertisement that follows.

When contacted by The Telegraph and asked about their process of posting and vetting advertisements from city firms, RMS Recruitment refused to comment.