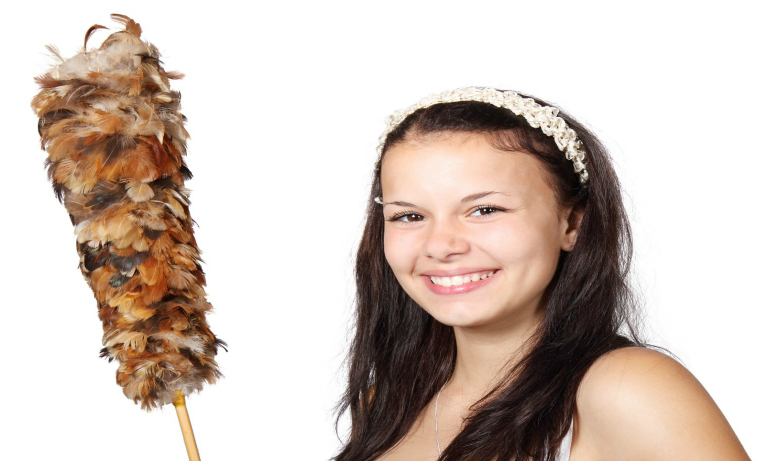 Jobseekers are being offered an unbelievable £45 an hour for a cleaning job – however, there's a catch

Two prerequisites of the role? Yip, you have to be naked… and female. One of the first women to be employed by Nudist Cleaners, Sia Rodney, 28, says there are times when she wonders what people’s intentions are.

Telling her story to the Daily Telegraph, she says, “He [her husband] would definitely say I was a nudist but I would just say I feel very natural naked. I have no problems with getting naked anywhere. I was very much raised with lots of siblings. We had baths together, ran around naked. It made sense because we’d only be jumping around in mud and getting dirty the next minute, or whatever.”

“I asked my partner, thinking he wouldn’t be on board, but he said it kind of suited me because I’m always naked – everywhere in the house – and I might as well get paid for it.”

Sia got the job pretty easily over a year ago, when the company was just a fledgling firm owned by Laura Smith.  She was one of the first to be employed and said:

“I had a Skype interview, sent some pictures. Then there was a conversation to make sure I was comfortable with the job and knew what the rules were. I understood that, if anyone gets out of line, I need to call Laura.

“The first client she sent me to was someone who booked before. She let me know that so I would feel comfortable. They ended up being a regular client.”

The next clients were all similar – nudists – and often had been for a long time. Then she started going to clean for people who had always wanted to try nudism but weren’t sure how they’d feel being naked in front of someone they didn’t know.

“The first people like that were a husband and wife who were in their 60s and wanted to start going to nudist places,” she added.

“I went there a few times and they ended up booking a round the world trip to visit nudist beaches and have some fun. I guess in that sense my visits worked.”

Although she has never had any trouble with clients, she said there had been times when she had wondered exactly what a client’s intentions were.

Sia also said that thought crosses her mind when people ask her for details about the rules they must follow. Sia said: “When I first get there sometimes you think are they asking me the rules because they want to push your limits. But every time I explain the rules and they pretty much understand.”

For Sia, the naked cleaning job is a way to earn extra money for herself as her partner is her family’s main breadwinner.

“I really enjoy it,” she said.

“Hippies I guess, like me – I have that attitude. And it’s a really good thing to do as a housewife because it can get claustrophobic at home.

“One other good thing about it is you can go on holiday whenever you want. But you build up a client base and when you go away, they still want the service.

“The company sends someone else and perhaps you lose that client because they prefer the change. I guess that could be hard but it suits me because my partner is the main earner and this is just extra money for myself.

All my clients are in the Derby area. The furthest I’ve been is Sheffield but that’s because there were two other jobs that broke up my journey. On average I get three jobs a week but they could be all in one day.”

The company is always recruiting for workers aged over 25 and yes, there is a call for men too, although not as desired as the women.

“Demand is much bigger for women,” Smith said.

“We have some male cleaners registered too but we don’t have too many requests for them.

Yvonne Traynor, CEO of the Rape and Sexual Abuse Support Centre, which supports women in Surrey and Sussex, said the concept is dangerous for the company’s employees.

She told GetSurrey : “This is not only abhorrent and exploitative but it is a potentially dangerous situation to put any woman in and is obviously not aimed at housewives who need help with chores but at sad, lascivious and desperate men.”