Think your boss may be a psychopath? These 20 signs will give it away

Have you ever felt that your boss is out for themselves and is trying to get ahead at the expense of others? 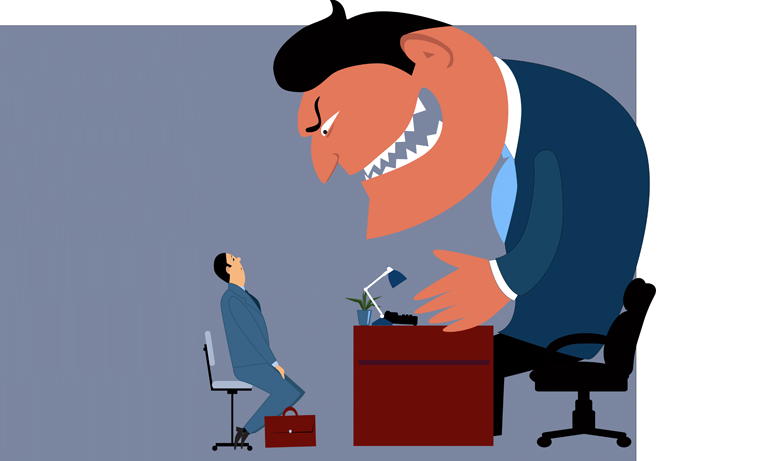 It is a given that you can’t like your boss all the time. No matter how great they are at leading and involving the team, they also have to get a job done. It is accepted that this is not always a piece of cake, but have you ever felt that your boss is out for themselves and is trying to get ahead at the expense of others?

If so, you are not alone. According to research carried out in 2014 by Cynthia Mathieu at the Universite du Quebec a Trois-Rivieres in Canada, as many as 4% of leaders show psychopathic behaviours, such as making fun of subordinates to make themselves look good or blaming everyone else if things don’t go to plan.

The research revealed that these leaders still somehow manage to climb to the top of the career ladder, leaving a trail of destruction in their path. This may seem pretty scary stuff and you might feel that you just have to shrug your shoulders and get on with it; however, this is not the case. The research also validated previous findings with regard to a system called B-Scan 360, which can identify psychopathic traits in the workplace.

This system recognises 20 traits that reveal whether your boss has psychopathic tendencies at work:

1. Sucking up to authority.
2. Acting superficially.
3. Using charm to get what they want.
4. Claiming to be an expert when it matters.
5. Rationalising their actions.
6. Showing disloyalty to the team.
7. Failing to plan.
8. Being unfocussed.
9. Acting impatiently.
10. Being unreliable.
11. Being insensitive to the needs of others.
12. Rarely showing their true emotions.
13. Coming across as cold.
14. Acting in a ruthless manner.
15. Failing to display empathy.
16. Acting in an intimidating manner.
17. Showing anger in the workplace.
18. Regularly asking tough questions.
19. Intimidating others.
20. Being over-dramatic.

The researches asked employees to rate their boss on the 20 traits on a scale of one to five, with one denoting ‘strongly disagree’, two denoting ‘disagree’, three ‘neither agree nor disagree’, four ‘agree’, and five denoting ‘strongly agree’. You might expect employees to rate their boss as three, scoring a total of 60; however, the research found that some individuals were scoring between 80 and 100, putting them very much on the psychopathic scale.

You may look at these traits and think there are some areas in which you feel your boss scores highly; if this is the case, analyse why you think this. If you are very unhappy at work, this could be due to the way in which your manager acts.

Alternatively, perhaps you are a boss and you have read the traits and think there are areas where you could improve. It is never too late to take action. By developing yourself, you are increasing the chance of success for yourself and the team around you.