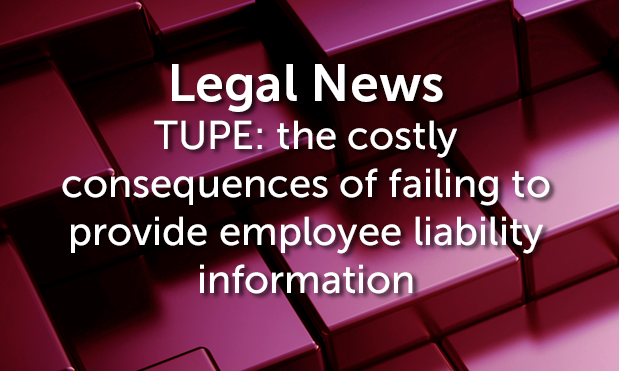 Under the Transfer of Undertakings (Protection of Employment) Regulations 2006 (“TUPE”), the transferor must provide the transferee with specific “employee liability information”. This includes information on:

“any court of tribunal claim or action that the transferor has reasonable grounds to believe that an employee may bring against the transferee, arising out of the employee’s employment with the transferor” (Reg 11(2)(d)(ii) TUPE).

Should the transferor fail to provide the prescribed information, then it may face an Employment Tribunal (“ET”) claim from a transferee for compensation.

The above case concerned a re-tendered contract with the Food Standards Agency, which was won by Eville & Jones (UK) Ltd (“Eville”).

As such, there was a service provision change from the old contractor, Grants Veterinary Services Ltd (“Grants”) to Eville, to which TUPE applied, meaning that all staff were to transfer from Grants to Eville on 2 April 2012.

Grants began to provide employee liability information to Eville. However, during February and March 2012, HMRC presented Grants with a winding up order and Grants began planning insolvency measures.

On 27 March 2012, Grants advised its employees that it would not be paying employees their March salaries until 5 April 2012 (later than usual). Eville did not learn of this proposed delay in payment until after this had been communicated to the employees.

Following the transfer, Eville brought a claim against Grants for failing in its obligations under Reg 11(2)(d)(ii) TUPE.

The ET held that, at the date that Grants had to provide the employee liability information (19 March 2012 i.e. 14 days before the transfer), Grants was in clear financial trouble, planning insolvency measures and therefore it was unlikely that its employees would be paid.

Therefore, in accordance with TUPE, Grants had reasonable grounds to believe that its employees may bring a claim against Eville for unlawful deductions from wages. Given its knowledge of the circumstances, there was no reason why Grants should not have told Eville this information.

When assessing compensation, the ET had to consider the loss arising from the transferor’s failure to comply with their duty to provide employee liability information and not the unpaid wages themselves.

The ET took into consideration the cost of some of the management time spent by Eville in dealing with the issue and other losses. It made an award of £500 per employee (the maximum amount it could award), which totalled £65,500 for the 131 affected employees. Whilst this award exceed the actual losses attributed to the breach of duty, the ET reminded the parties that it was not restricted to the maximum level of loss suffered by the transferor.

This case is a reminder to recruiters who act as employers who may find themselves in the position of transferor of the costly consequences of not providing employee liability information, particularly given the level of compensation awarded in this case.

As a general point, in these circumstances, it would be in a transferee’s interests to seek indemnities in respect of any transferring debts (including those which it may not have knowledge of at the time of entering into the agreement). Whilst it would be standard practice to ask for such an indemnity from the seller in a business sale, a transferee may not be in a position to be able to ask for such an indemnity in a second generation outsourcing situation such as this.