Seasonal workers could be at greatest risk and face the most uncertainty following this month’s holiday pay ruling. 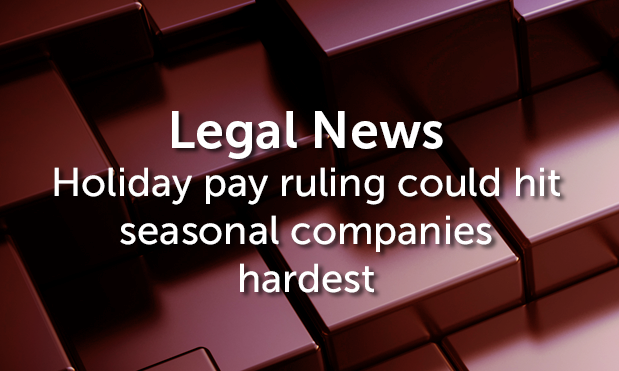 Seasonal workers could be at greatest risk and face the most uncertainty following this month’s holiday pay ruling.

Businesses which are heavily reliant on seasonal workers could be at greatest risk and face the most uncertainty following this month’s holiday pay ruling.

As many of our readers will be aware, on 4 November, the Employment Appeal Tribunal (EAT) handed down its decision in the high profile cases of Wood v Hertel UK and Fulton v Bear Scotland.

The landmark decision relates to how holiday pay is calculated and the way in which the EU’s Working Time Directive (WTD) is interpreted in the UK.

Currently under the WTD, employees are legally entitled to four weeks’ holiday pay a year (the UK provisions provide for 5.6 weeks), however there has been little in the way of guidance on how it should be calculated. As a result, many UK employers calculate holiday pay based on basic salary only and exclude elements such as overtime and commission from the calculation.

The two judgments potentially open the door for back pay claims and costly holiday pay calculations in the future and organisations which employ a lot of seasonal workers, such as retail, leisure and agriculture, could be hardest hit.

In an earlier case relating to whether holiday pay should include commission payments, the Advocate General suggested that the calculations for doing so should be based on the previous 12 months.

In this judgment concerning overtime however, the EAT said that the reference period for the calculation of pay itself should be decided by the Government and not the Courts. However it has been suggested that a 12 week period rather than a year could be considered as this is a method using for calculations of pay in UK law when there are no normal working hours.

This 12 week rule could have huge ramifications for businesses which are heavily reliant on seasonal workers. If it was applied, it could see employees working for an intensive three month period and then receiving a windfall when they take holiday quickly thereafter. The impact on a company’s payroll could be significant.

Despite the judgment, there remains a great deal of uncertainty and confusion. Although the issue of back pay was probably not as bad as it could have been for UK Plc, the issue of how holiday pay will be calculated in the future could be very significant.

The seasonal element to this issue presents a serious threat and in the lead up to Christmas, many companies who require staff to work overtime could be building up a liability for which they have made no provision.

Should you require further information or advice then please contact our legal helpline on 0330 1223 4155.