The employee had enough time off for sickness reasons unrelated to his disability, to trigger the employer’s absence procedures. 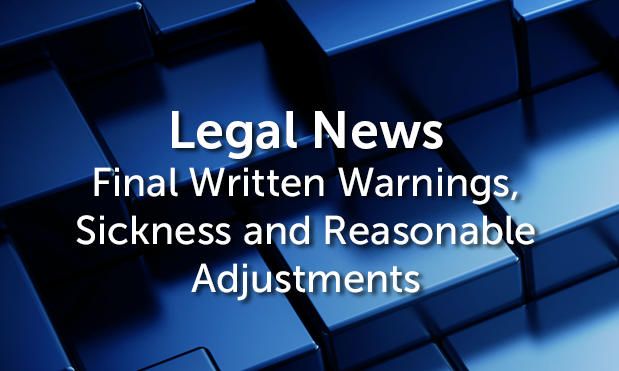 The EAT found that the employer effectively had no option but to dismiss the employee in the circumstances.

The Employment Appeals Tribunal (“EAT”) has recently held that an employer’s failure to ignore a final written warning for sickness absence, did notamount to a failure to make reasonable adjustment when considering further disciplinary action against the employee.

In General Dynamics Information Technology v Carranza, the employee was disabled and had a high absence record. His employer made various reasonable adjustments such as providing him with extra breaks and allowing him time off to attend medical appointments.

The employer’s absence policy contained ‘trigger points’ which stated that disciplinary action would be taken where an employee had 4 periods of sickness or a total of 10 days’ sickness in a rolling period of 12 months.

The employee had enough time off for sickness reasons unrelated to his disability, to trigger the employer’s absence procedures. As a result, he received a disciplinary warning, followed by a final written warning at a later point in time.

Occupational Health advice taken by the employer, suggested that the shoulder injury would only last for a few months, though did confirm that the employee’s disability was likely to result in further absences in the future. As a result of this further absence, the employee was dismissed at an absence management hearing and he brought claims of disability discrimination and unfair dismissal.

By way of reminder, employers have a duty to make reasonable adjustments where they know (or should know) that an employee has a disability and there is a provision, criterion or practice (“PCP”) which places the disabled employee at a substantial disadvantage compared to employees who are not disabled.

Here, the EAT found that the relevant PCP was a requirement for the employee to consistently attend work. Clearly this would impact upon an employee with a disability, compared to employees without disabilities and who could arguably attend work much more often.

In light of this PCP however, it was not accepted that disregarding the employee’s previous final written warning for absence related reasons was a reasonable adjustment that the employer should have made, when analysing his latest absence.

Although no action had been taken for the 2 subsequent periods of absence before the 3 month absence took place, it was held that there was no reasonable basis on which to suggest that the previous final written warning should be disregarded.

In addition, there were no grounds on which it could be suggested that the employer needed to reconsider the reasonableness of the final written warning, when deciding upon the eventual dismissal. The final written warning was not issued in bad faith and was not inherently inappropriate. There was therefore no requirement for the employer to reconsider this warning when contemplating dismissal.

The EAT found that the employer effectively had no option but to dismiss the employee in the circumstances. As a result, the claims of disability discrimination and unfair dismissal failed.

Whilst the case is likely to be welcomed by recruiters who act as employers, the EAT did suggest that it would be more appropriate for future Claimants to bring a claim for discrimination arising from disability in such circumstances, as opposed to a claim of a failure to make reasonable adjustments. Had the employee done so here, the outcome may well have been different.