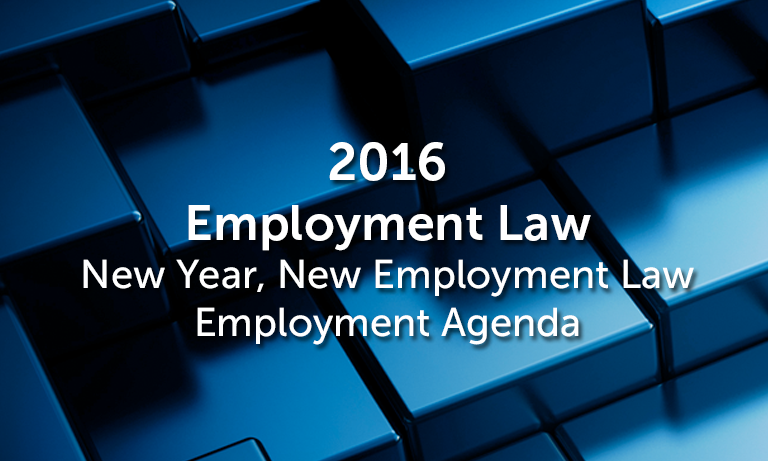 Commercial organisations with a £36m+ turnover, carrying out business in the UK (wherever incorporated) and supplying goods and services, must publish a modern slavery and trafficking statement where their year-end is after 30 March 2016.

Action: Assess risks and, where appropriate, put in place policies, training, due diligence processes and measure their effectiveness.

In April, the minimum wage for workers aged 25+ will increase to £7.20. Many employers are concerned about how they will absorb such a large increase in wage costs.

Action: Plan carefully if changes are being considered to employee terms. Consider how the NLW will affect existing pay scales and whether pay increases will be demanded/agreed at higher levels. Review existing commercial contracts if intending to push costs along a supply chain.

In April, new laws are expected that will mean public sector workers cannot return to the same sector within 12 months of receiving an exit payment unless prepared to repay it. Later in 2016, large public sector exit payments will be capped at £95,000 in most cases. The tax treatment of termination payments could also be in line for a shake-up.

Action: Plan ahead. Careful thought must be given to all departures and their timing but staff are likely to be asking to leave early and approaching you with concerns over issues such as pension and redundancy entitlement.

From 6 April 2016, individuals with taxable income above £150,000 per year (including non-employment income, such as dividends and rental income) are likely to have a reduced pensions annual allowance, which could be as low as £10,000.

Larger employers in the private and third sectors will need to report upon gender pay gaps. New legislation is expected by March 2016 and the first reports are expected to fall due in April 2018.

Action: Review all current pay practices across the organisation to identify and understand the differentials which may exist. Consider how to present information meaningfully and in context.

Further rulings on holiday pay are expected next year in the Lock and Bear Scotland cases, both of which could clarify the law, or muddy the waters still further.

Action: Review holiday pay arrangements to assess potential liabilities, including the risk of claims for back pay. Consider whether to make changes now or wait for UK law to be further clarified.

New English language requirements for public sector workers in customer facing roles are likely to be introduced by mid/late 2016.

Action: Keep an eye out for the Code of Practice that will accompany the new rules. Ensure language difficulties are identified during recruitment procedures and as part of performance management, taking care to avoid unlawful discrimination. Draw up a complaints policy and ensure those responsible for dealing with complaints have the skills to do so.

New industrial action laws including higher thresholds for strike ballots, will require at least 50% of members to vote and, for important public services, 40% to vote in favour of the action. Other changes include permitting agency workers to replace striking staff, a tighter control on picketing, longer advance notice of strikes, changes to the ballot voting paper, a need to re-ballot with ongoing disputes, greater scrutiny of facility time and the removal of ‘check off’ in the public sector. The changes are expected to be implemented by the summer of 2016.

Action: Employers anticipating strikes should be prepared for a change in union strategy when the changes are implemented: for example, fewer and more tactical ballots and the use of alternative forms of protest.