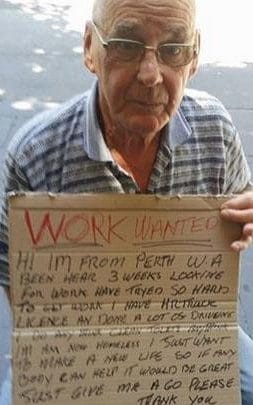 Sherryn Jackson, from Melbourne Australia, was walking through the city when she saw a homeless man holding a sign that tugged on her heartstrings.

Barry had recently moved from Perth to Melbourne after being offered work but the job offer fell through and he had no other option but to live on the streets.

“I’ve tried so hard to get work. I have my HR truck driving licence and have done lots of driving. I will do anything. Even clean toilets.

“I am now homeless I just want to make a new life so if anybody can help it would be great.

“Just give me a go please.”

Although Jackson couldn’t personally offer him work, she wanted to help Barry and so shared his sign asking for work to local Facebook groups.

Barry has received multiple calls about jobs, has six interviews lined up and has even been offered temporary accommodation.

Barry has called her his “angel” after all the help she has given him.

“I usually don’t do this kind of thing but at about 3pm I stopped and had a chat to Barry,” Jackson told the Daily Mail.

“He was clean and well presented and represented himself really well, he had his resume and even had references and that’s when I knew he was fair dinkum.”