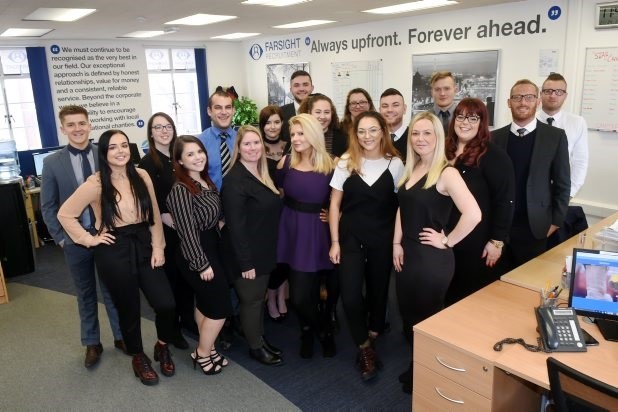 The firm, which specialises in providing recruits for the construction sector, began life as a two-man start-up in a 10ft sq. spare bedroom in 2005, The team at Farsight Recruitment: Image Credit – The Derby Telegraph

Farsight Recruitment builds its winning success formula on the following attributes: Be positive and optimistic, always speak the truth, smile, learn from mistakes, be a team player, have a balanced approach to life, help create an atmosphere of fun and be consistent, committed and an abundant person.

The company which now employs over 20 staff, has three core values – honesty, value and reliability – and a 17-point staff rule book which includes the aforementioned necessities.

Being crowned the nation’s best recruitment agency in the construction sector took place at London’s Emirates Stadium, home to the industry’s most recent On the Tools awards ceremony.

“On the Tools is the UK’s fastest growing construction community, with over a million Facebook followers,” says Tom Dean, the firm’s founder and chief executive. “That’s why this award is such a big deal to us – it wasn’t a generic business award where the firm that spends the most time on its application ends up winning it. This was voted by proper construction people.”

Tom, 35 says they thrive because of their healthy work-life balance. “Three years ago, I decided to create an infrastructure that would allow me to live a freer life but with the business continuing.

“I didn’t want to sell the business – it’s my baby. For the last three years, I’ve been travelling for three months and then coming back to work for three months. Travelling is my personal passion. Thanks to having an amazing director in Donna Butler and a fantastic senior management team, I don’t need to be there all the time.

“I’ve now got a decent work-life balance. As well as travelling to countries all over the world I also meditate every day and do yoga classes twice a week.”

Tom also prefers to work directly amongst his team so that he can see staff – many of whom are in their early 20s – develop in their roles, something else that provides Tom with more satisfaction than a healthy balance sheet. “There are many recruitment agencies out there who exist only to make cash,” he says. “Some would sell their own granny for 10p.

“From my perspective, three years ago, I achieved everything I wanted to financially but it didn’t make me happy. That’s when I re-evaluated what matters in life. While finance is important, the quality of our people, the brand and the integrity that sits behind everything we do is worth more to me than money. We’ve never had a month when we’ve not made a profit, but it’s not my focus. Pleasure to me is seeing people develop and evolve.”

Supporting charities is yet another great source of satisfaction. Tom says: “I’m a big believer in supporting good causes and that’s based on my own awakening three years ago. I recognise it’s really important for any business or person to have some meaning behind themselves. Having a company that made money just for myself wasn’t fulfilling so I looked at ways to make it more than that.

“Part of the plan was to adopt charities to help. I now work with charities helping slum kids in Sri Lanka and India. And each year in the office we vote on which local company to support. Last year the team decided to support the Padley Centre, which supports homeless people in Derby. We managed to raise about £5,000 for them.”

So where did it all begin? Tom says, “I left school at 16, despite coming from an academic family where the norm was to go on and achieve master’s degrees.

“I had a chip on my shoulder about not achieving as much as my siblings had. So, I set up my own business and, in particular over the past three years, have tried to make it something I can be proud of. To be proud, I need the business to be more than a money-making machine for myself, because I understand that happiness doesn’t come exclusively from money.”

So, where will they go from here? Tom says: “If I could freeze everything, I would. But I know enough about business to know that if you’re not growing, you’re shrinking.

“We’ve got a five-year plan that involves building a network of four offices. Our market research indicates there’s scope to open branches in Sheffield, Leicester and Stoke. Times are good but we’re not going to be standing still.”