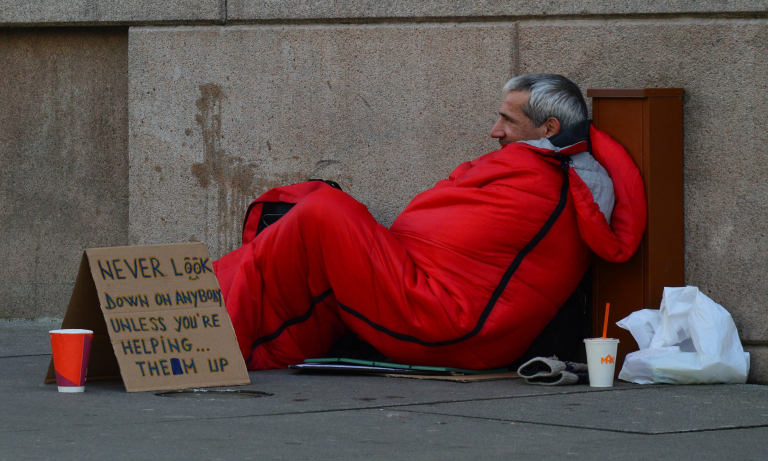 A recent report revealed that over 300,000 people are now sleeping rough in Britain

Housing charity, Shelter, has released a recent report showing that over 300,000 people in Britain are now sleeping rough.

As a result, a crowdfunding campaign has been launched to fund employment training to help people on the streets to get back into work.

The campaign, Beam, allows users to sponsor homeless people and contribute towards training courses in London. It also lets users follow their progress, with regular updates and photos of them receiving training or at work.

Donations can be made either monthly or as a lump sum, and donors can choose to either sponsor a specific homeless person or to make a general donation to every campaign.

The app has been backed by Sadiq Khan, the Mayor of London, and is being launched in partnership with ten homelessness charities including Centrepoint, St Mungo’s and Thames Reach.

The process works as follows; a charity will recommend a homeless person, staff at Beam will then ask for a second reference verify the accuracy of their personal stories, which are posted on the website along with a picture.

An action plan and budget for the campaign will then be created and the money paid straight to the training provider.

If a person finds work through the campaign, they are then encouraged to repay their funding by donating to other people’s campaigns via small monthly standing orders.

So far, every Beam member has opted to pay forward the full value of their campaign.

Beams first member, Tony, successfully funded his campaign to train as an electrician within less than month, raising £4,378 from 136 supporters.

“When I first heard about Beam,” Tony said, “I thought, ‘why would anyone want to help me out?’ I couldn’t believe it when the money started coming in.

“Then, when I read the messages from my supporters, I just didn’t have words. Thanks to Beam, I’m now training to become a fully-qualified electrician.”

Alex Stephany, the founder of Beam, said: “I believe people want to help but feel powerless.

“Crowdfunding technology makes it safe and easy to help someone out of homelessness for the long-term.”