Disabled people have an unemployment rate of 9.1 per cent, compared with 3.6 per cent for people without disabilities 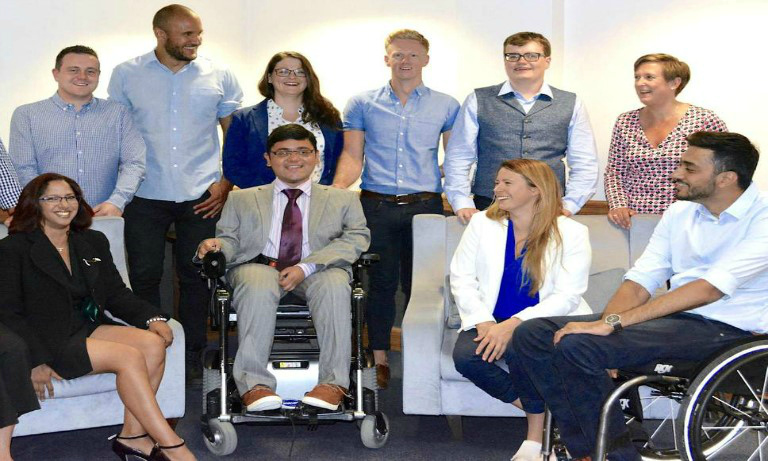 Liz Johnson, second from right, and the team at The Ability People

Liz Johnson says she feels privileged to have always had a job she loved. She was just 26 when she won gold in in the 100m breaststroke at the Paralympic Games in Beijing, despite living with cerebral palsy and learning that her mother, who was sick with cervical cancer, had died while Johnson was travelling to the games.

Bonnie Johnson took her daughter to swimming lessons early on to strengthen her muscles after she was born hemiplegic, meaning that the right side of her brain is smaller and weaker than the left.

But swimming turned into more than physiotherapy. Johnson was selected for Team GB when she was just 14 and went on to win gold medals at the Paralympics, World Championships and European Championships before she retired in the run-up to the Paralympics in Rio in 2016.

“I’ve had 32 years to get used to my disability and as a Paralympic swimmer I spent most of my time in a swimming costume, so I couldn’t hide my disability, people could see it,” Johnson says. “But not everyone feels that way.”

With the vast jump in unemployment numbers between disabled and non-disabled people, the UK government has set out to try and halve the disability gap, which would put one million more people into work.

The real task is changing employers attitudes, prompting Liz to setup The Ability People, an employment agency staffed by people with disabilities.

Johnson got the idea after watching a news piece discussing the number of working-age people with disabilities who are unemployed. Alongside her swimming career, she had completed a degree in business management and was used to talking at events and consulting on recruitment. The more she worked in recruitment, the more she realised that people with disabilities often have the skills needed to be good recruiters.

“I thought they would make perfect recruitment consultants, because it is about balancing long hours and a life with an impairment, which can be difficult,” she says. “We have to work towards a goal to get something done because our first attempt won’t be successful. You have to build up good relationships with strangers, often. Resilience is high, because we have to focus to get a job done.”

Adil Ghani, who lives with muscular dystrophy, was one of the first to join the team. He is 21 years old and his condition means he cannot move from the neck down. He knew Johnson through a charity called Panathlon Challenge, a children’s charity that provides sports competitions and training days for young, disadvantaged and disabled people across the UK. But he didn’t know what she was planning until she contacted him in early April to discuss the business proposal and ask if he would be interested in joining.

“I absolutely jumped at the chance to be involved in such a unique project,” Ghani says. He hopes not only that he is able to do a good job in the role, but that the way the company operates will challenge the status quo.

“I hope that The Ability People as an organisation is able to leave a lasting mark on the world of recruitment,” he says. “I think it will show others in the industry just what is possible when you put your mind to it and decide you are going to do things a certain way and set out to help every individual you can from the start without bias or prejudice.”