‘Younger workers are threatened by me’: Businesswoman marks one-year job-hunting anniversary with rant against employers 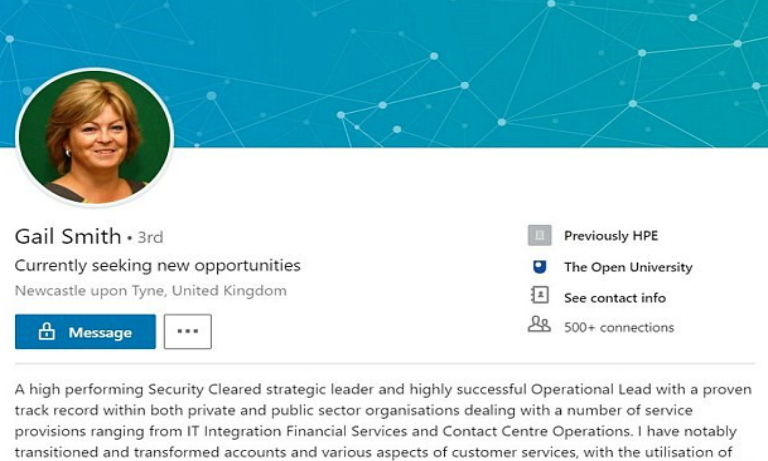 Gail Smith, 52, a highly-qualified businesswoman, has been unemployed for 13 months

Highly-qualified businesswoman, Gail Smith, celebrated her one year ‘currently looking for work’ anniversary with a LinkedIn rant after being rejected for over 30 jobs. She took voluntary redundancy in June 2017, with the idea that she could cherry pick her next job.

Despite applying for around 30 jobs, Gail is still unemployed a year later and believes that it could be because the ‘younger generation feel threatened’ by her decades of senior management experience. 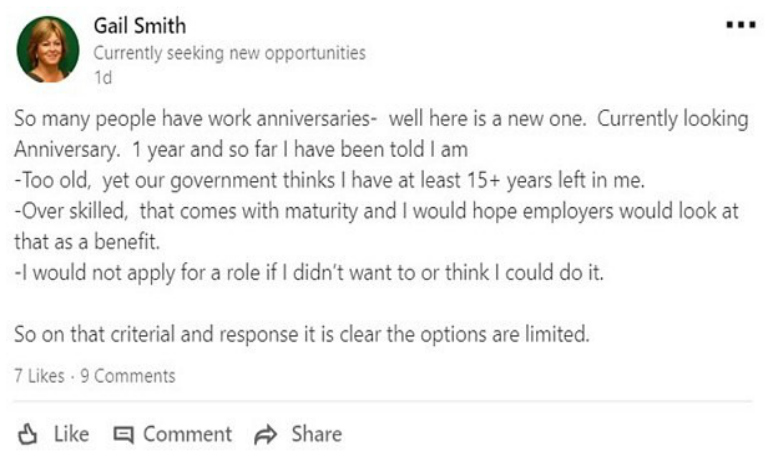 Smith aired her frustrations on job website LinkedIn and said in her search for a new job she has been told she is both ‘too old’ and ‘overskilled’.  This has even led to her playing down her experience after interviewers told her it may be a negative for potential roles.

Her husband has even suggested she ‘apply for a job at a supermarket’ – but she believes she wouldn’t get it due to her experience, which includes managing teams of 250 staff.

According to her LinkedIn profile Gail has previously been employed with computer firm Hewlett Packard and at the Automobile Association (AA).

Gail, who lives in Newcastle, wrote in her rant: ‘So many people have work anniversaries – well here is a new one: Currently looking anniversary.

‘One year and so far I have been told I am:

‘-Too old, yet our government thinks I have at least 15+ years left in me.

‘-Over skilled, that comes with maturity and I would hope employers would look at that as a benefit.

‘I would not apply for a role if I didn’t want to or think I could do it.’

While many commenters were shocked and called her situation ‘outrageous’, others were not surprised and she play down her wealth of experience and not disclose her age, advice she has now taken.

Gail said: ‘I don’t put these posts on [LinkedIn] lightly but I was particularly frustrated [on this occasion].

‘I had been in an interview for a role I could have done easily and it was a role that interested me.

‘But the interviewer said ‘oh when I first saw your CV, I did think that you might be too old for this role’.

‘I have chased them for feedback [on exactly why I didn’t get the job] for two weeks and I keep getting fobbed off, which is outrageous.’

Regarding her experience, Gail said: ‘It is being treated as a negative. Now whether the younger generation is feeling threatened by more mature people… but like I said in my post I wouldn’t be going for these roles [to just] tick a box before my retirement. I am a long, long way off retirement.’

Having previously been open about her age on job application forms, Gail has now started refusing to disclose her age when applying for jobs and is now going to down play her work experience.

When Gail was involved in recruiting people, she says she would never have looked over someone for a position due to their age.

The job search continues and hopefully there won’t be a second-year anniversary to celebrate.