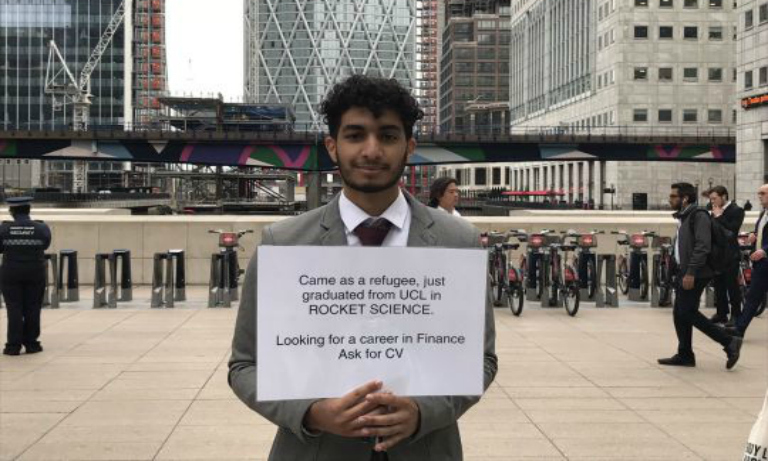 Mr Elbarkey stood outside London's Canary Wharf with a board asking for a job in finance (Photo credit: Mary Engleheart / Twitter)

A Libyan refugee, Mohamed Elbarkey, who holds a degree in “rocket science” now has three interviews to prepare for thanks to his innovative way of looking for work, by standing outside London’s Canary Wharf holding a sign asking for a job in finance.

The 22-year-old holds a 2.1 degree in aerospace engineering from Southampton University and is completing his masters in space engineering from University College London. He said he applied for more than 70 jobs with no result. He fled Libya as a young child after his family were persecuted by Colonel Gaddafi and the family settled in North West London shortly after.

His plea for work went viral when a tweet with Mr Elbarkey holding his placard outside Canary Wharf was repeated thousands of times after Mary Engleheart, who works at the International Rescue Committee, posted about his struggles.

Mr Elbarkey’s message read: “Came as a refugee, just graduated from UCL in ROCKET SCIENCE. Looking for a career in Finance. Ask for CV.”

Ms Engleheart has since been contacted by over 200 people asking for Mr Elbarkey’s CV, she said. Among those showing support for Mr Elbarkey’s hunt was Virgin Group founder and billionaire Sir Richard Branson. He wished Mr Elbarkey “the best of luck” and urged him to look at Virgin Galactic’s career page, an organisation described as the world’s first commercial space line.

“I decided to put my suit on and try my luck – hoping that maybe one executive in the City would stop to give me advice or perhaps an interview,” said Mr Elbarkey.

“A job in finance would be ideal for me because I’m fascinated in the way that world events can drastically affect financial markets. I’m particularly interested in using artificial intelligence and my space engineering degree has given me the experience coding. Now I want to apply these skills to the financial sector,” he wrote in an article for HuffPost UK.

“A lot of people who work for larger organisations have contacted me for my CV to see if my skills match what they are looking for and to see if they could place me,” he said.

Mr Elbarkey is not the first to use the tactic to gain employment. He said he took inspiration from David Casarez, a homeless web developer who used a similar tactic to find work in Silicon Valley.