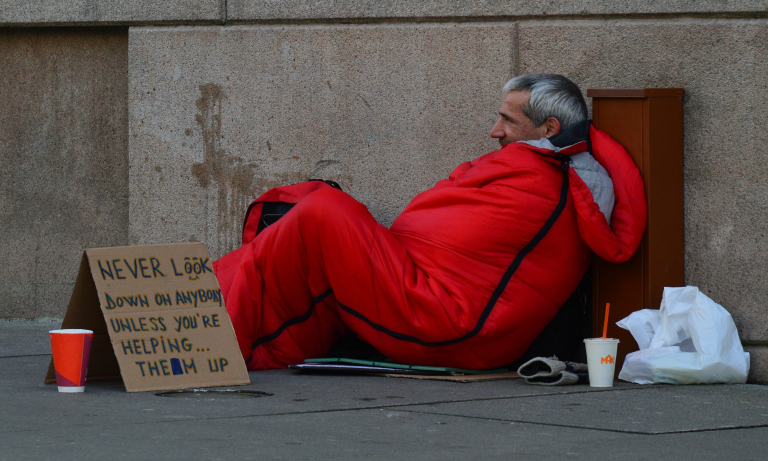 The charity, set up in April 2018, aims to have up to 500 homeless people in jobs by the end of the year

New charity, Only A Pavement Away, works with a number of homeless charities – including Crisis – to link homeless people with companies who can offer work to help them rebuild their lives.

The charity says the project provides a win-win solution by employing a homeless person and easing what it describes as a recruitment crisis in the hospitality sector.

Its founder, Greg Mangham, told Sky News that the idea provides a smoother route to employment for those who’ve fallen on hard times.

He said: “When they go to the interview the person who is interviewing them knows they’ve been homeless.

“And they also know that the homeless charity and associations have a structure that protects these people.

“If they have a problem then the employer just rings the charity or association and they’ll get a support worker in there.”

The charity has already helped Kevin Watson who was homeless just seven months ago but with their help he has found both accommodation and a salary.

He spent a month living in his car over Christmas after his home life broke down and he turned to alcohol.

“I hit the bottle bad…I was drinking a litre of vodka a day,” he said.

Despite losing everything, he now has accommodation and a job at a pub in London.

“My life is 100% better than how I was feeling at the time sleeping in the car. You wake up, you think ‘what am i going to do today?’ but there’s nothing there. They’ve [the charity] helped a lot – I was amazed they helped so quickly.”

As well as homeless people Only A Pavement Away wants to help ex-offenders and former military personal to find work.

Recruitment manager at Young’s Abi Dunlop says taking people who’ve been homeless can, in some cases, provide a better employee.

“I think the positive of coming through this channel is that we do know their background and it’s being very honest,” she said.

“The charities we work through make sure that they are work ready so actually it can be potentially more reliable than someone where we don’t know their background just through an interview,” she added.

The government wants to halve rough sleeping in England by 2022.