Meet Tengai, the job interview robot who won’t judge you 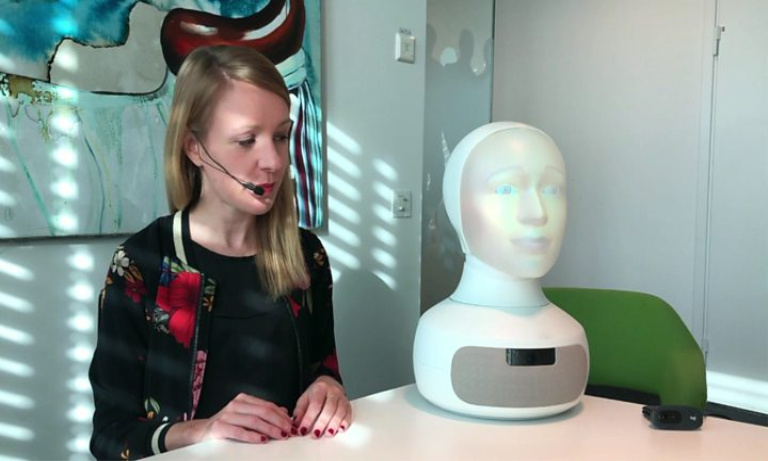 Would you be happy being interviewed by a robot? {Photo credit: BBC}

The world’s first robot designed to carry out unbiased job interviews is being tested by Swedish recruiters. The robot is named Tengai – she measures 41cm (16in) tall and weighs 3.5kg (7.7lbs). Tangai sits on top of a table directly across from the candidate she’s about to interview, sitting at eye-level.  Her glowing yellow face tilts slightly to the side. Then she blinks and smiles lightly as she poses her first question: “Have you ever been interviewed by a robot before?”

The robot is the brainchild of Furhat Robotics, an artificial intelligence (AI) and social robotics company born out of a research project at Stockholm’s KTH Royal Institute of Technology.

The firm has spent the past four years building a human-like computer interface that mimics the way we speak, as well as our subtle facial expressions. The idea, according to chief scientist Gabriel Skantze, is that “it feels much less scary or strange compared to a more traditional robot”.

Working with one of Sweden’s largest recruitment firms, TNG, the goal is to offer candidates non-biased job interviews that managers and recruiters can often bring to the hiring process, while still making the experience “seem human”.

“It typically takes about seven seconds for someone to make a first impression and about five to 15 minutes for a recruiter to make a decision. We want to challenge that,” explains Elin Öberg Mårtenzon, chief innovation officer at TNG’s office in central Stockholm.

Unconscious biases include making assumptions about someone’s competence based on gender, ethnicity, voice, education, appearance, or as a result of informal conversations before or after an interview.

Tengai doesn’t engage in pre-interview chit-chat and poses all questions in an identical way, in the same tone, and typically, in the same order. This is thought to create a fairer and more objective interview.

“I think it is a really good help while screening – if you have a big recruitment process with a lot of candidates – having someone, a robot, with no emotions, no feelings,” says Petra Elisson, a 50-year-old who works in healthcare recruitment.

Recruiters and developers are also working on an English-language version of the robot which is expected to be rolled out by early 2020.