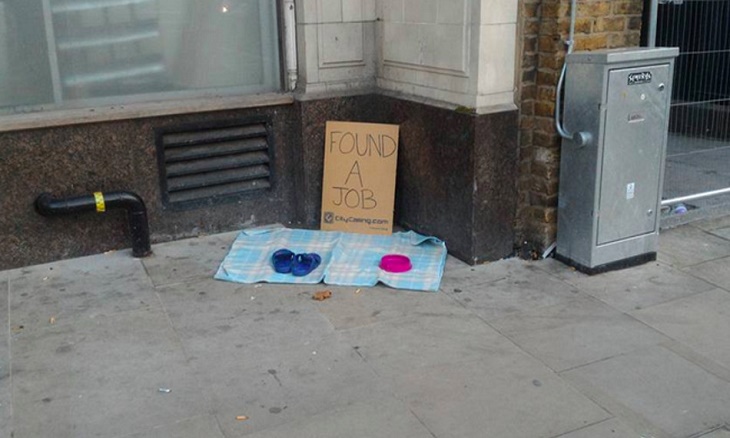 The advertising campaign recreated a homeless person living on the street

A marketing campaign by a careers website has attracted criticism after it left cardboard signs around London reading “Found a Job” on fake “homeless beds”.

The campaign, by careers website City Calling, used blankets, sandals and dog bowls in order to recreate a homeless person living on the street. The images came to light after being shared on an Facebook page, Sh** London, where users labelled the faked scenes as “sick” and “offensive”, according to the website Mashable.

Others expressed their opinion on the careers site Facebook page, with one user writing:: “To rob the most vulnerable people in society of whatever modicum of dignity they manage to cling to in the face of such hardship by using their plight as an object of supposedly comedic derision is obscene.”

According to the Evening Standard, Facebook user Clare Emmett wrote: “Those Found a Job pavement ads: dear, dear. Are you being wilfully crass in a desperate attempt to appear “edgy”, or are you simply too obtuse to appreciate the unflattering light they cast on your company?”

City Calling released a statement on its Facebook page, responding to the controversy:

“We are a job board that facilitates every individual jobseeker no matter their personal circumstance.”

“We have remained and will remain a free service for both jobseeker and employer. As an organization, we do endless amounts of charity work throughout the year that certainly does not go unnoticed by those that we help.”