The art of the handshake

No one notices if you DON’T smell of gym socks in the office, neither will they notice that your handshake is fine 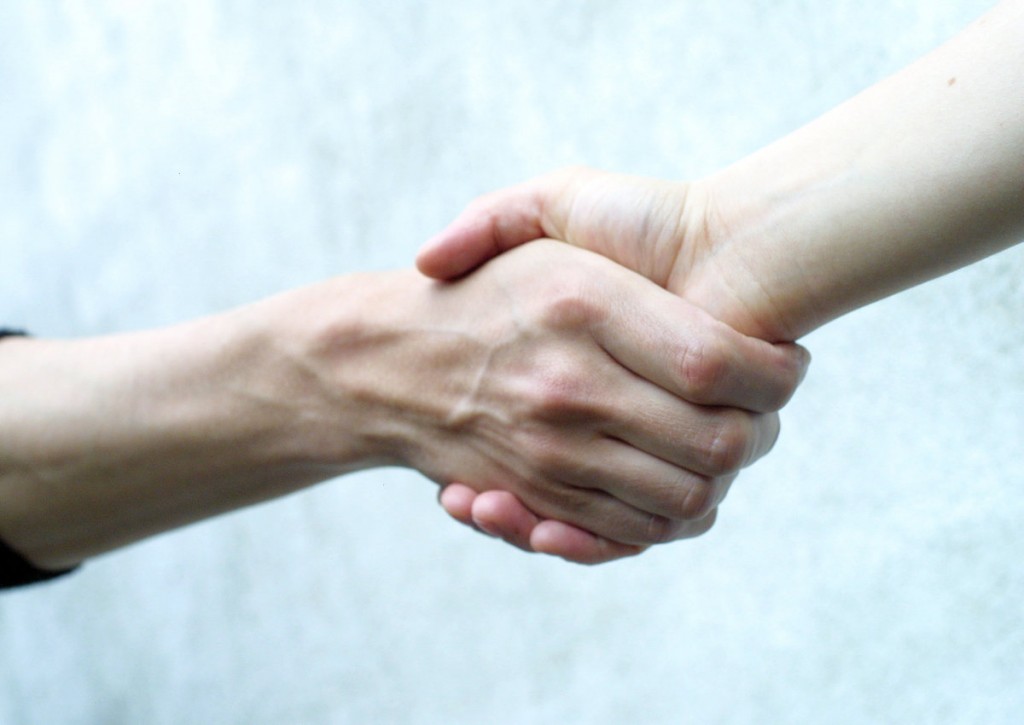 A good handshake is a base expectation; we expect it, and like great hygiene, goes totally unnoticed

What’s more, we have to form a fully-fledged opinion on them on a first meeting. We know that it’s absolutely not okay to judge an interviewee based on physical criteria, and any physical contact in the office is a lawsuit waiting to happen. But, there’s one instance when these rules don’t apply. When all HR scriptures fly out the window and entire futures are made or broken on one tiny moment of physicality….

In the history of recruitment, the moment of truth has become easier and easier to delay. From the trusty phone call, to the paper CV, to the fax machine, to email, to social media. Opinions are often already formed before the first physical meeting. But as we know in recruitment, as in life, reputations can take a lifetime to build, and a handshake to ruin.

The problem with handshakes, is that they’re a little bit like hygiene. A good handshake is a base expectation; we expect it, and like great hygiene, goes totally unnoticed. No one notices if you DON’T smell of gym socks in the office, neither will they notice that your handshake is fine. A good handshake is good purely because of its unremarkableness. (I’m aware that’s not necessarily a word, but this is an entire blog about handshakes, so anything’s possible).

The perfect handshake is firm, yet relaxed. The hand should be the perfect balance between cupped (but not grabby) and flat – but not so flat that the handshake-ee might believe you are going in for a low five.  Look the recipient in the eye, but don’t widen your stare as you press, that’s weird and scary, and it should last no more than three (subtle) pumps – don’t cling-on like a Star Trek extra.

When a handshake breaks these cardinal rules, people notice. And if you didn’t realise you noticed, take these all too recognisable handshake fails as proof that you did:

It’s Summer. You’re nervous. You didn’t sleep well last night. You got off the tube a stop late and had to speed walk down Oxford Street at lunchtime. You didn’t have time to use the bathroom before your interview. We get it. But wipe it on your trousers if you have to while you follow us into the room. The only situation in which ‘moist’ is an acceptable adjective is when discussing baked goods. A clammy handshake is as good as starting the meeting by telling the other person you just wet your pants.

He knows it’s clammy, you know it’s clammy, but no one can say anything. But the moment the receiver has to wipe their hand on their own trousers after touching yours, you both know it’s happened. Often, said owner of clammy hand tries to make it less noticeable by only committing 50%. So they end up presenting a claw like hand, hoping that the receiver won’t take the full force of a soggy palm. This is not better! They end up sort of grabbing your limp fingers and doing all the work. We call this, The Limp Fish. Rubbing the hand on your opposite bicep as if you are cold is the best way to get rid of clammy hand without anyone noticing. And if you really don’t have time, just fully commit. We’ve all had damp hands. Few of us have had Mackerel for hands. The former is more excusable.

You’re confident, you’re capable. You could do this job standing on your head. You’re the best candidate, you deserve the role. It’s like your CV was written for this. But how, oh how, to convey this to the person standing in front of you, who doesn’t know you from Adam?

Let me just clarify at this point;  crushing their fingers and ripping their arm out of their socket while enthusiastically grinning like a madman is not the answer. A nice, unremarkable handshake followed by a confident verbal summary of your CV with a couple of anecdotal examples is just absolutely perfect.

Though if you could pulp me some kale in that paw before you leave so I don’t have to spend £100 on a Nutri Bullet, we might call it even.

Rings hurt. Sometimes they can lead to conversation. I once saved a particularly average interview (on my part) when I was a graduate, by spending the last 5 minutes gushing over the particularly large engagement ring I noticed when the HR lady shook my hand. However, if you are wearing many rings for fashion sake, and you are not going to a fashion interview, it may be better to leave them off for the first interview.

First of all, you never know the dress code of an office you are visiting for the first time, or how conservative the person you are meeting is. Secondly, and more importantly, if you’ve ever had the little paddy bit at the base of your finger caught in someone else’s ring (keep it clean!), you will know that there is no easier way for an interviewee to make you well up with real tears. Apart from that one time a candidate who had been doing quite well in the interview responded to my ‘tell me something funny about yourself’ question by recounting the time they had a really bad acid trip. (This is real)

Giving it the Middle Finger

This one is just for some midweek fun. This happened to me once. I don’t know if it was by accident, I don’t know if it was their calling card. But even though I meet new people all the time, I have never forgotten it. So perhaps it was really a genius move. The time someone gave me the middle finger. Try it on your colleagues, try it on your Boss. Try it next time you leave an interview that you know has gone SO badly that nothing really matters anymore. Because the look on their face will make it all worthwhile.  Go into the handshake as though nothing is happening. Take a sensible grip of average firmness. Look them in the eye, of course. And then, just when the think the handshake is nearly over, and because of it’s perfectness, haven’t noticed it one bit, curl your middle finger in, and gently stroke their palm. It doesn’t sound like much, but I promise, it will make your day.