The ad for middle leader level vacancies in a Manchester school, which was posted by EduStaff on 2 February 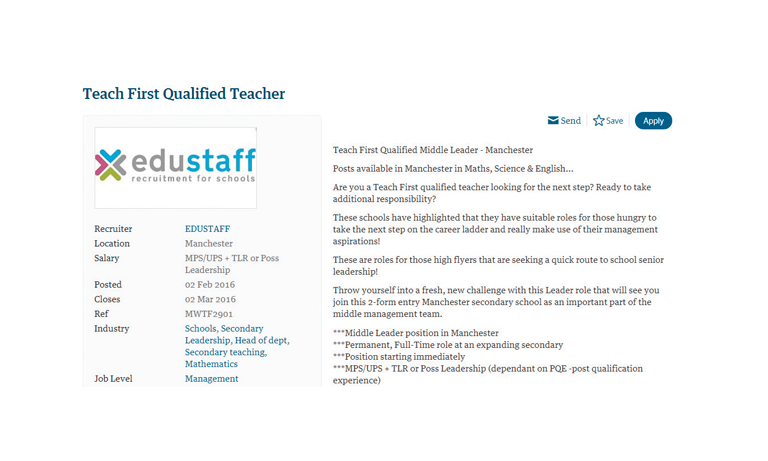 Speaking to Schools Week, EduStaff said it advertises teaching vacancies according to the school's specifications

An education recruitment agency has posted a job advert on the Guardian Jobs website that excludes many adequately qualified teachers from applying. The ad for middle leader level vacancies in a Manchester school, which was posted by EduStaff on 2 February, made it clear that applicants could only apply if they had completed the Teach First leadership development programme.

Speaking to Schools Week, EduStaff said it advertises teaching vacancies according to the school’s specifications and does not question the ways in which its clients prefer to filter their applicants. It stressed these adverts in no way mean that it has any kind of deal with Teach First, and that all applicants are considered on an equal basis.

Teach First, an organisation that takes high-quality graduates and places them in schools in deprived areas as part of its teaching qualification scheme, said that it had been made aware of the job adverts and would be looking into the situation further. The organisation confirmed it had not been working with EduStaff on the vacancy postings.

Michael Merrick, a teacher from Cumbria, described the advert as ‘unjust’ and pointed out that such adverts are promoting a two-tier system within the teaching jobs market. He explained that it gives the impression that teachers who have qualified through Teach First are of a superior quality, rendering those who have used other routes to the same qualification – such as through School Direct – less capable, which is simply not true.

For teachers to be denied employment opportunities based only on their training route seems unfair. Mr Merrick added that it was an odd way to filter out applicants who may be of an outstanding calibre.

Dr Mary Bousted, general secretary of the Association of Teachers and Lecturers, advised schools to avoid making recruitment decisions on this potentially discriminatory basis. She said that at a time when leadership support is weakening and there is a shortage of teachers, adverts barring people from applying for a job based purely on their route to qualification is a curious way of recruiting, as it significantly reduces the pool of good applicants.

While Dr Bousted admitted that Teach First is a good programme, she stressed that it would be fairer for graduates from all training routes to compete on an equal footing. Schools are then given a much wider choice of applicants from which to pick, based on their teaching experience, skills and training.