1 in 10 UK construction firms claim to be less competitive when tendering for work as a result of new false self-employment rules. 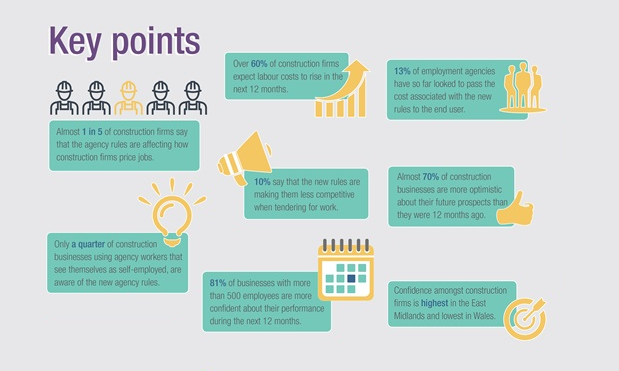 One in 10 UK construction firms claim to have become less competitive when tendering for work as a result of new rules designed to tackle so-called ‘false self-employment’ in the sector – according to a report by law firm Irwin Mitchell.

The survey of over 600 construction firms has been published six months after the controversial new laws affecting agency workers were introduced.

Since 6 April 2014, employment agencies are required to ensure all workers supplied to an end user and who no longer pass HMRC’s test for being classed as self-employed, should be treated as employees and added to their payroll.

As a result, the recruitment business will deduct the individual’s Income Tax and National Insurance Contributions via the PAYE system.

It is believed that the legislation affects 200,000 construction workers in the UK.

By April 2015 it will also become compulsory for employment agencies to report individuals that are not taxed as employees to HMRC. Failure to do so will result in financial penalties.

According to Irwin Mitchell’s study, only a quarter of construction businesses that use temporary agency workers are aware of the new rules.

Out of those, only 13% said that employment agencies were passing on the cost associated with the new rules to the end user.

Significantly, almost one fifth of construction firms say that the new rules are affecting how they price jobs, with 10% claiming that they are now less competitive when tendering for work.

“The fact that a quarter of construction businesses are unaware of these new rules will be of concern to the Government, but it is perhaps of no great surprise when you take into consideration the hurried Government consultation and implementation.

“I think it likely that recruitment firms will increasingly try to pass costs back once the reporting requirements kick in next year, with employment agencies having to report non-taxed workers to HMRC from that date, or face penalties.”

“Recruitment agencies operate on tight margins and as their costs rise and reporting obligations increase, we believe that the number of firms that say that these rules will impact on how they price work will grow considerably. This in turn will have a knock on impact on the competitiveness of UK construction firms.

“We believe these rules are critical issues for employment agencies and construction businesses, but as costs get transferred, the pressure on the construction industry to manage them will intensify.”

The report by Irwin Mitchell also highlighted that overall, construction firms were still optimistic about trading conditions during the next 12 months.   Almost 70% of construction businesses are more optimistic about their future prospects than they were 12 months ago. Confidence about their company’s prospects was highest within larger firms and amongst businesses based in the East Midlands.   However, demonstrating the impending impact of the rules on future overheads, over 60% of construction firms expect labour costs to rise during the next 12 months.

A full version of the report can be downloaded here