How should deductions for overpaid wages be set out on a payslip?

The Employment Appeals Tribunal (EAT) held that the employer had failed to set out the purpose of the deduction on Mr Ridge’s payslip. 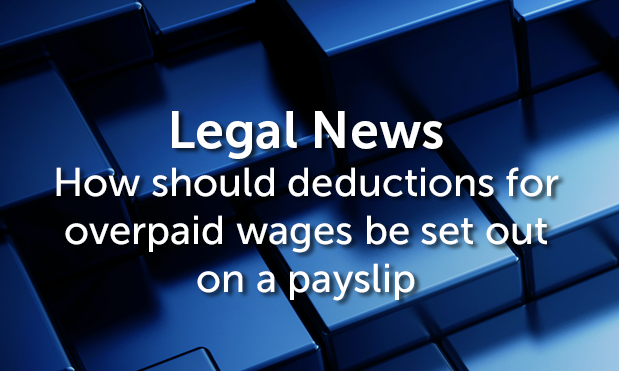 How should deductions for overpaid wages be set out on a payslip?

A recent case has served as a warning to recruiters who act as employers to set out deductions for overpayments in an itemised payslip properly and in accordance with the relevant legislation.

By way of background, in accordance with the Employment Rights Act 1996 (“the ERA”) an itemised pay statement must contain:

In the case of Ridge v HM Land Registry, Mr Ridge’s employer adjusted his pay due to an overpayment relating to his sick pay. The deduction was made to a subsequent month’s pay and the reduction marked with a minus on his payslip. No further explanation was given.

Mr Ridge argued that there should have been an explanation for the deduction on the payslip and issued tribunal proceedings, complaining that his employer had failed to comply with its obligations under the ERA.

The Employment Appeals Tribunal (EAT) held that the employer had failed to set out the purpose of the deduction on Mr Ridge’s payslip. As a result he was entitled to a declaration to that effect (a statement confirming the employer had acted unlawfully).

The EAT did not however make any award for compensation as the purpose of the deductions had been explained to Mr Ridge before he commenced proceedings.

This case is an important reminder to recruiters who act as employers of the importance of providing an explanation for any deduction made on a payslip.

Such explanation does not need to go into great detail, but must be enough so the purpose of the deduction is clear. Further, an explanation must be provided even if the employee already has an understanding of the basis for the deduction. Hidden or unexplained deductions will be unlawful.

Whilst the employee did not receive compensation on this occasion, it should be noted the Tribunal does have a power to make an award, depending on the facts of the case. Should recruiters who act as employers fail therefore to properly itemise payslips, they place themselves at risk of costly consequences.