Time off for dependants – what is reasonable?

Reasonable time off is afforded to care for dependants in situations such as making arrangements for care of a dependant who falls ill,… 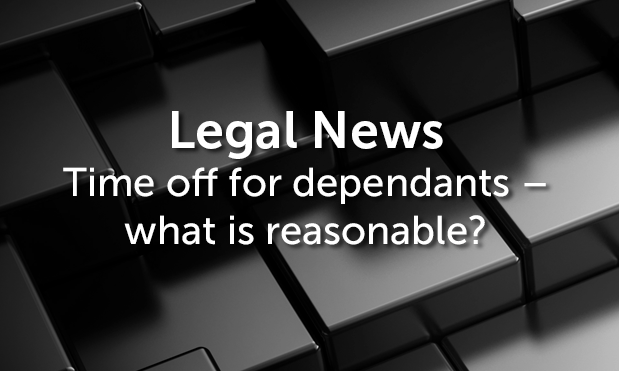 Time off for dependants – what is reasonable?

Under the Employment Rights Act 1996 (“the ERA”), employees have a right to take a reasonable amount of time off to deal with certain emergency situations concerning “dependants”.

A “dependant” includes a spouse, civil partner, parent, child, person living in the same household or a person who reasonably relies on the employee for assistance/care.

Reasonable time off is afforded to care for dependants in situations such as making arrangements for care of a dependant who falls ill, gives birth or is injured. What is “reasonable” will depend on the individual facts and circumstances, however previous case law has suggested that, in most cases, reasonable time off will only be a few hours.

Importantly, under the ERA, the right to time off only applies where the employee has:

The recent case of Ellis v Ratcliff Palfinger Ltd highlighted the importance of an employee confirming the the reason for their absence as soon as is reasonably practicable.

Mr Ellis’s partner was heavily pregnant and due to give birth. On the Sunday, Mr Ellis had been to and from the hospital with his partner with some health concerns (although she was not in labour). On the Monday Mr Ellis did not attend work, nor did he on the Tuesday (when his wife gave birth).

During this time, the Claimant had not called work to let them know he would not be coming in, but had asked his father to telephone to explain that he was in the hospital.

The employer sent a text to Mr Ellis on Wednesday, asking him to urgently contact the office. Mr Ellis then spoke with his manager, where he was reprimanded for his conduct. Mr Ellis later left a message stating that he would not be in the following day. He did not return to work until the following Monday.

Mr Ellis had a previous poor attendance record and had received a warning which was still live. His employer called him to a disciplinary hearing and terminated his employment on the basis that he failed to make reasonable efforts to keep the employer informed that he would not be attending work for the week.

Both the Employment Tribunal and the Employment Appeal Tribunal (EAT) rejected his claim. The EAT held that Mr Ellis had failed to inform his employer of his absence as soon as it was reasonably practicable to do so. It was not an acceptable excuse that he did not have battery on his mobile phone and he should have used other means.

Mr Ellis had actually gone to and from the hospital on the Monday and therefore could have contacted his employer at some juncture.

This case shows the importance of employees getting in touch with their employer, even where there is an emergency situation.

In deciding whether it was “reasonably practicable” for the employee to have contacted the employer, it will depend on the individual circumstances and each case should be looked at individually. An employer may take account of the employee’s mental state. In this case, no medical evidence was put before the tribunal, however in some situations where an employee has been clearly distressed, allowances may need to be made.

As a general note, the length of time taken by Mr Ellis in this case does not reflect the purpose of the legislation, which is designed for “emergency” situations only.

Many employees will try and label leave as “dependants leave”, however recruiters who act as employers should not be afraid to scrutinise this, to ascertain whether there is a genuine emergency situation and what exactly time is being taken for.