British worker’s salaries are diminishing, with almost a third of employees taking a pay cut over the last five years 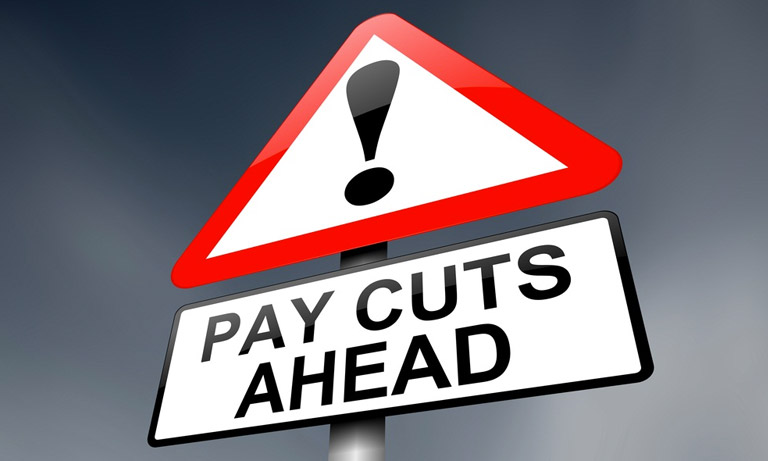 The average pay cut facing workers is 4% of their annual salary, a £1080 decrease based on an average income of £27,000, and the typical employee hasn’t had a pay increase in two years.

It was also revealed that the average UK employee was last offered a promotion four years ago, and that almost one in ten workers have been made redundant in the last five years.

It’s not just salaries that are being cut either. Other benefits that have been reduced include pensions, bonuses, overtime, holiday days, and even work breaks.

The research, commissioned by Printerland.co.uk, asked 2,000 UK adults in full time employment about their job security and found that a shocking 17% of respondents admitted they don’t feel secure in their current employment.

50% of UK employees confessed that they regularly do things outside of work to make ends meet. This includes selling things online (28%), betting or gambling (13%) and doing odd jobs for extra cash (11%).
7% of Brits even have a second job to help them with everyday expenses such as mortgages/rent, bills and food.

When looking at this research, Catherine Bannan, HR Manager at Printerland.co.uk, commented: “It’s surprising to see how many people don’t feel secure in their current employment, despite our research showing that the average Brit has been in their job for around six years.
“Businesses and governments alike should do everything they can to ensure their staff feel valued by openly communicating with them, things such as the financial position of the company.

“In addition, if staff feel motivated in their roles, this is proven to increase productivity, which can only be good for UK companies. This doesn’t have to mean paying out endless cash bonuses. Employees could be offered perks like days off, flexitime, free coffee or shopping discounts, all of which would make for a happier workforce.”

Regionally, the research shows that those in Northern Ireland and Wales have the most stagnant wages, with employees living in these areas going over two years without a pay increase.
41% of Northern Irish workers have been forced to take a pay cut in the last five years, however this region has the lowest level of redundancy in the country (5%).

Those working in the North East of England face the highest levels of redundancy (17%) followed by employees in the East Midlands (12%).

The survey also revealed that Brits are having to take steps to make ends meet. 22% have borrowed money from friends or family to pay their bills and 27% have admitted to cutting back on the finer things to save money.

A shocking 16% state that they’ve had to sell possessions to make the money needed for bills, and 13% have had to cut back on necessities such as food just to get by.