Among the least in-demand professions across the world are logistics managers, air traffic controllers, wood production operatives and maritime workers 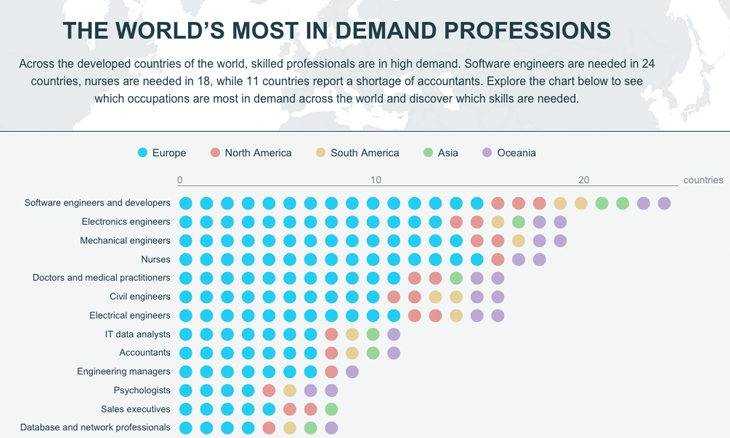 ‘Software engineer’ is the world’s most in-demand profession

New analysis by Michael Page, the specialist recruitment company, reveals the world’s most in-demand professions with software engineers, needed in 24 countries, coming out on top.

The analysis, which looked at official occupation shortage lists published by national governments of countries in the OECD Better Life Index, revealed the occupations and sectors most represented in the occupation shortage lists across developed countries. This also included average salaries, work-life balance, and happiness scores which were taken from the OECD database plus national government sources, and the Better Life Index:

So, whilst software engineers and developers fall into the technology sector, it’s those who work in science and engineering (e.g. electronics and mechanical engineers) who will have a better chance of securing themselves work overseas, should they decide to.

Although skilled professionals looking to make the move will also have to take into account the average salaries of developed countries around the world, as well as what kind of work-life balance those living there tend to have, and how happy they are.

An interactive visualisation of the analysis can be found on the Michael Page website ‘The World’s Most In Demand Professions’ which allows people to see which occupations are most in demand across the world and discover which skills are needed and where.